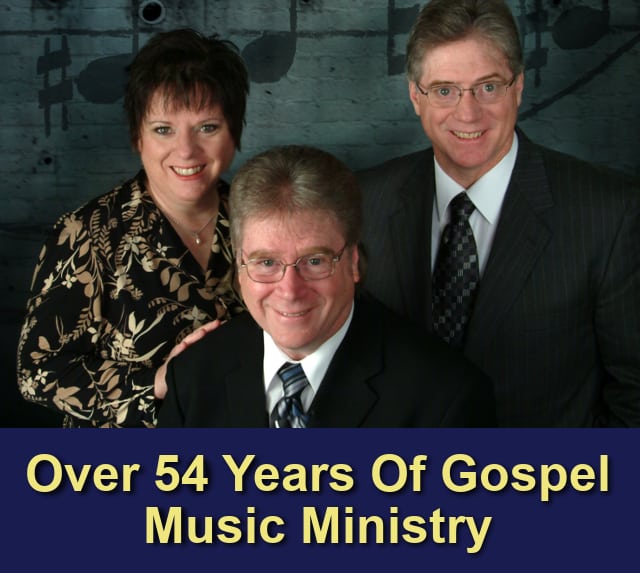 It will now be Tuesday, July 28th at 6pm at the Cowan Civic Center Exhibition Hall.

The New Horizons are a family singing group from Lebanon, Missouri. The Group consists of two brothers, Max and Danny Rhoades and one sister, Becky (Rhoades) Buttrey. The group started 55 years ago as a male quartet, but in 1973 the brothers found themselves in need of a singer — and waiting in the wings was their younger sister Becky. She was the missing piece, that voice, which was needed to mold the group into what it is today.

The New Horizons feel they have been put together to fulfill a call God has placed on their family years ago. Consistency seems to run in the family for their parents, the late Dean and Julia Mae Rhoades, pastored the same church, the Lebanon Church of the Nazarene, for over 50 years before retiring. To God be the glory!

The trio, The New Horizons have been faithful to their roots in gospel music. The lessons learned around the piano with their mother and sitting around the old phonograph listening to their favorites like The Blackwood Brothers, The Statesman, The Oak Ridge Boys, The Speer Family and the Happy Goodman’s Family, have been the back bone of their singing style over the years. You could characterize their sound as a traditional southern style with down home family harmonies. Their songs have a simple message that cuts through the complicated problems we face as a society today, and emphasize that God is bigger than our problems!

A well-loved part of The New Horizons’ ministry is Danny’s saxophone playing. Many in the music business have referred to him as “Mr. Gospel Saxophone,” and rightly so. Danny plays the older melodies of hymns and songs of the church that have stood the test of time. You will enjoy this special part of their ministry.

The New Horizons have been recording for many years and have a large selection of these recordings available. Their latest recording project is “Isn’t God Good” and Danny’s latest saxophone project is “The New Horizons Present Danny Rhoades Sax” Volume 13. The New Horizons goals today are the same as they were over 50 years ago, and that is to make a difference in the lives of the people they are privileged to meet.

View their show schedule below, or Request The New Horizons Albums and other Merchandise here.

Max is an original member of the New Horizons. He is also the oldest of the three Rhoades kids. Max is the lead singer in the group and he is also the spokesman on stage during the concerts. He is a major supporter of southern gospel, country gospel, and bluegrass gospel music in Southwest Missouri. Max is the general manager of the KTTK radio station 90.7 (All God’s Music All the Time). He is very proud that KTTK has been nominated by the Singing News Magazine as one of the top 10 Southern Gospel radio stations in the nation.

Max has many interests outside of music. He loves watching football, basketball and baseball on the collect level, but when he is not on the road he especially enjoys working with his Fox Trotter Horses! He is also an avid reader; he loves stories of the old West.

Max resides in Lebanon, Missouri. He is married to Brenda Denny Rhoades. He has two children and the light of his life are his three grandchildren Braxton Dean, Elise Mae, and Dottie Jo.

Danny is also an original member of the New Horizons. He wears many hats in the group, such as manager, sound technician, and most important he is the tenor singer. Danny is known all over the country as a first-rate sound technician…he has set the stage and ran sound for many of the largest gospel singings, bluegrass festivals, and country concerts in the business. Danny is known for his honesty and hard work throughout the industry.

Danny loves to be outdoors hunting and fishing. His greatest pleasure is when he is out in the woods hunting coon with his Walker and Blue tic hounds. He always has an exciting story to tell of his coon hunting adventures!

Danny resides in Lebanon, Missouri where he has retired from serving his third term as the Presiding Commissioner of Laclede County. He and his wife Nancy have three children, fourteen grandchildren, and two great-grandchild and another on the way.

Becky is the newest member of the New Horizons…she joined the group in 1973! She is also the youngest member of the family and the only sister. Becky sings the alto in the group. She has traveled with the group through high school, college, and graduate school. Becky taught in the Lebanon Elementary Schools for 31 years. It was not unusual to see her grading papers on the bus on the weekends. She is now enjoying being retired from teaching.

Becky resides in Lebanon, Missouri with her husband Jim Buttrey, They have four children and fifteen grandchildren. She loves to shop for antiques and decorate for the holidays. Becky enjoys reading new recipes and cooking. She also loves to plan and host gatherings in her home.

Jack was a faithful and cherished member of the New Horizons…without Jack it would have been difficult to get to and from our singing engagements each week. For fourteen years he drove the bus and took over the wheel through sun, rain, sleet and snow for the New Horizons. Jack’s friendly nature made him a favorite at the Churches and concerts where we sang while he was with us. It was not uncommon to see him interacting with the people and talking to them like an old friend. Needless to say, Jack had friends all over the Midwest.

Jack was married to Janet for over 50 years. They were blessed with two daughters and two grandsons. Jack and Janet together attended Heritage Baptist Church and were avid supporters of southern gospel music. The New Horizons appreciated Jack for all he did…each week as we would pull into the bus barn we would say… thank God and Jack we’re home!

Our 2022 schedule will be coming soon

Lebanon Missouri’s homegrown gospel group The New Horizons as they perform for Lebanon Junior and Highschool students back in 1978.